Crystal Cove, which is set on the coast of California below Santa Cruz and above Monterey, is one long stretch of gorgeous territory, marked by an age-old lighthouse at the north end and a public pier filled with shops and fun at the south end. Settlers moved into the area in the 1850s, but the town was officially founded in 1883. The weather is beautiful year-round, with the occasional splash of rain and drift of fog. The hills to the east boast wondrous vegetation and beautiful homes. The crests of the mountains sparkle at sunset. Buena Vista Boulevard, what the Pacific Coast Highway is called in our town, is populated with shops and restaurants.

Fisherman’s Village, a quaint, two-story shopping center where The Cookbook Nook and Nook Café are located—my aunt owns the complex—is located at the south end of Crystal Cove. It is L-shaped and adorned with elegant columns, white balustrades, boardwalk-style walkways, and a brick parking lot. Pretty nice, if you ask me.

One of my favorite things in town is the set of twin silver statues of dancing dolphins that stands at the intersection where Buena Vista Boulevard meets the egress out of town. I also love the state-of-the-art aquarium and all the hiking trails and…

Well, I could go on and on. I adore Crystal Cove, and I’m so glad I moved back.

I am Jenna Hart, a former advertising executive, avid reader and self-admitted foodie. I moved home to Crystal Cove to find my smile. Why was it missing? Because my husband died in a mysterious boating accident a couple of years ago. A career at the prestigious Taylor & Squibb Advertising in San Francisco wasn’t that much fun without David in my life. I returned home to help my aunt open a culinary bookshop and cafe in the thriving Fisherman’s Village complex. The only trouble is, I don’t cook! But, to my credit, I have vision. Not because I’m long and lanky and can peer over the tops of most peoples’ heads. Nope. I have vision because I’m not only trained to market the heck out of a product, I am also as curious as all get out.

Let me introduce you to a few of my friends and family:

Aunt Vera is a handsome and large woman in her sixties, a woman who favors caftans and turbans and copious strands of beads. Having invested wisely in the 1970’s, Vera is independently wealthy. Long ago, she lost the love of her life and rarely speaks of him. She never married. She loves me like a daughter. She often spends her days telling fortunes, not that she can tell people much more about their futures than I can; she doesn’t have a direct connect to the other worldno ghosts pals, no spirit guides. But she cares, and caring can make all the difference in the world.

My father, Cary Hart, is a former FBI analyst, a handsome man in his sixties who looks like the famous actor, Cary Grant. Currently he owns Nuts and Bolts, a hardware store, not because he needs the money. He doesn’t—he has a healthy bank account, like my aunt—but he needs to be busy. Dad is an expert handyman. He is also a widower of a few years. His wife, my mother, was the love of his life. He and I had a falling out when Mom died, mainly because I, having just lost my husband, was a basket case and wasn’t there for my father. Water over the falls, per my father. He wants me to be happy. However, as for me investigating murder? Well, he’s not for it. I tell him I’m not investigating; I’m standing up for someone I love, but he gets in a huff. Tough.

Bailey Bird and I have known each other since childhood. We weren’t always best friends; we ran in different crowds, but once Bailey started working at Taylor & Squibb, she and I became fast friends. In fact, she saved my rear end on many occasions, holding me back when I wanted to voice a less-than-positive opinion. Bailey, like me, is looking for a change and moves back home. I hire her on the spot. She has a razor-sharp mind. She is what I like to call a walking card catalogue. She may be itty bitty in size, but she’s got a giant-sized spirit.

Katie Casey is the innovative chef at the Nook Cafe, also a childhood friend of mine. She reminds me of Julia Childs or, rather, Dan Ackroyd impersonating Julia Childs. She is a big woman with lots of curly hair and a boisterous laugh. Though Katie didn’t have official restaurant credentials—she had been the personal chef for a wealthy widower until he passed away—I hired her after she wowed my aunt and me with an audition meal. Katie is as loyal and true as the day is long.

Cinnamon Pritchett is the thirty-something chief of police, and we’re becoming friends, but it has taken some work. She reminds me of a well-toned camp counselor packing a gun. Per my aunt, Cinnamon can sing like an angel and roller skate like a champ. I’ve heard that in her teens, Cinnamon was a handful. The fact that her father ran out when she was born didn’t help. Thanks to the Big Brother program, my father took Cinnamon under his wing and got her focused. She went to college then returned home and climbed the ranks quickly to her present position. She’s no nonsense, but she does have a finely honed sense of humor.

Rhett Jackson…what can I say? Rhett. Gorgeous! Nice. Good-hearted. He owns Bait and Switch Fishing and Sport Supply Store, a booming business on The Pier. Formerly, he was a chef whose career was put on hold when arson destroyed the fancy restaurant where he worked. He has the most startling ocean blue eyes, that if I were lost at sea, I just might drift toward them and be swallowed whole. [Think of any of the dark-haired actors who played James Bond and you’ll get the idea.] Rhett is normal, if that’s possible. However, his family history is a mystery to me, and one that I want to solve.

Last but not least, there’s Tigger, the ginger cat that walked into my life the day before we had our grand opening. He has the cutest face, big green eyes, a winsome mouth and huge personality. He performed twirls and spins to win my heart. According to my father, ‘If a kitten without a collar walks into your life, you have to keep him.’ I’ve got to tell you that comment surprised me. Far be it from me to dismiss my father’s ideas. Tigger joins me daily at the shop, and often gets into mischief. 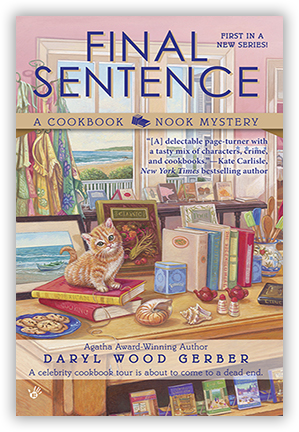 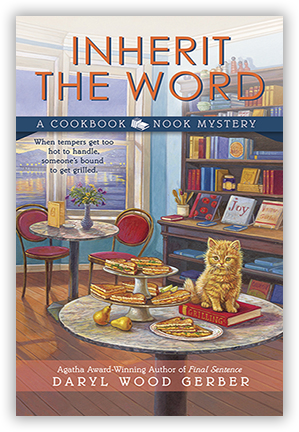 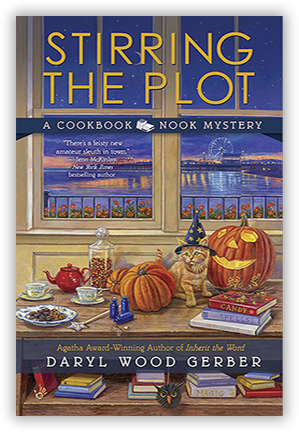 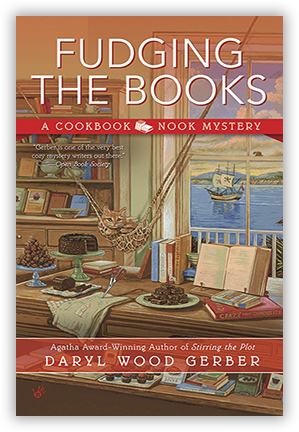 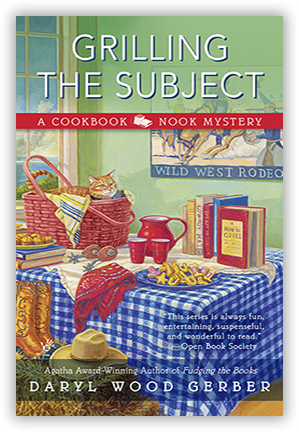 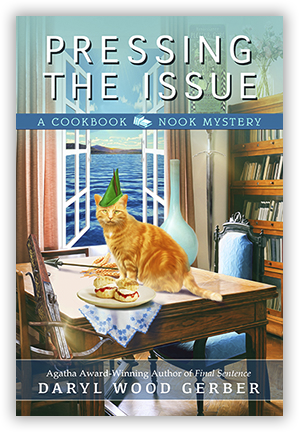 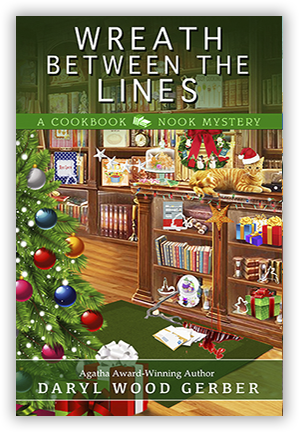 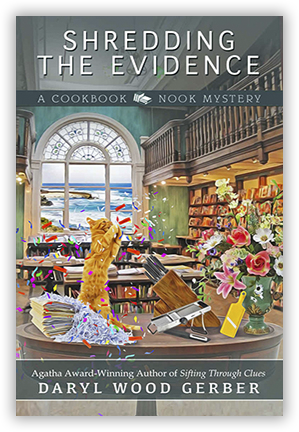 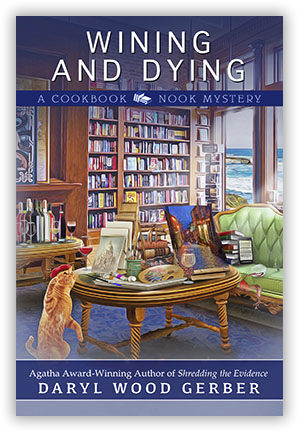 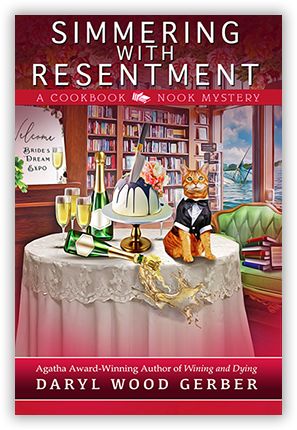 Wreath Between the Lines

Click on a cover to read the book club questions from that book.
Note: Daryl Wood Gerber is available to talk with your book club via Facetime or Zoom. Please email Daryl to arrange a date and time.