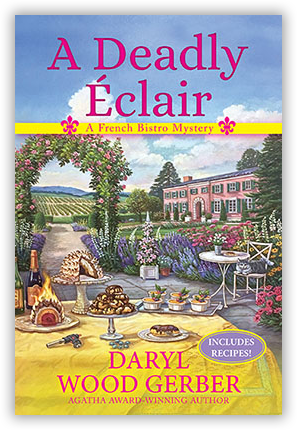 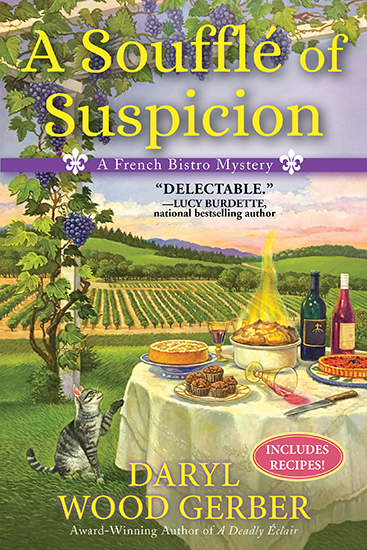 A Soufflé of Suspicion

The buoyant mood at Bistro Rousseau deflates when Chef Camille’s sister, Renee, turns up dead in the chef’s kitchen, and Mimi Rousseau must tease the real killer out of a mélange of menacing characters.

Crush Week in Nouvelle Vie is a madhouse—in a good way. Tourists pour into town for the pressing of the Napa Valley’s world-renowned grapes and all the town’s businesses get a nice lift, including Bistro Rousseau and Maison Rousseau. Mimi is raising the ante this year with a Sweet Treats Festival, a wonderland of croissants, cakes, tarts, and soufflés crafted with expert care by the area’s top talents.

Chef Camille’s sister Renee is managing the festival with a cast-iron fist, upsetting everyone, including her sister. Which is bad for Camille when Renee turns up dead in the chef’s kitchen. Mimi is still building her business, so her first course of action is to whip up answers and catch the unsavory perpetrator before Camille takes a dusting and gets burned.

Colorful, enjoyable characters…One word of warning: her descriptions of the food and wine pairings are so very vivid and realistic that readers should not be hungry when they read this mystery.
—Booklist
Gerber ticks all the boxes for a successful cozy: a capable protagonist, intelligent dialogue, a fine sense of place, eccentric yet plausible suspects, and clues galore.
—Publishers Weekly
Just as delicious as the first… When it comes to the word ‘appetizing’ you automatically think of food. But when it comes to the literary scene, this series is well beyond appetizing.
—Suspense Magazine

It’s always been Mimi Rousseau’s dream to open her own bistro, but it seems beyond her grasp since she’s been chased back home to Nouvelle Vie in Napa Valley by her late husband’s tremendous debt. That is until her best friend Jorianne James introduces her to entrepreneur Bryan Baker who enjoys investing in promising prospects. Now, with her own bistro and inn, Mimi is throwing the inn’s first wedding ever.

The wedding will be the talk of the town, as famous talk show host Angelica Edmonton, daughter of Bryan’s half-brother, Edison, has chosen the inn as her perfect venue. Anxious, Mimi is sure things are going to turn south, especially when Edison gets drunk and rowdy at the out-of-towners’ dinner, but by the evening, things begin to look up again. That is until the morning rolls around, and Bryan is found dead on the premises with an éclair stuffed in his mouth. And the fingers point at Mimi, whose entire loan is forgiven in Bryan’s will.

It’s up to Mimi to clear her name and get to the bottom of things before the killer turns up the heat again in A Deadly Éclair, the scrumptious series debut by Agatha Award-winning author Daryl Wood Gerber.

With a likable cast of characters, engaging dialogue and Napa Valley as the backdrop, this was a fun book to read and I look forward to the next book in this terrific series.
—Dru’s Book Musings
A sweet treat with dazzling characters, a sleuth full of charm, and blossoming romance.
—Seattle Book Review
What a SWEET cozy! Daryl Wood Gerber has served up her readers a delectable mystery with fine characters and a full-bodied story.
—Escape with Dollycas
Warmth, humor, a few chills, a soupçon of intrigue, and plenty of charm make for a great read.
—Cozy up with Kathy